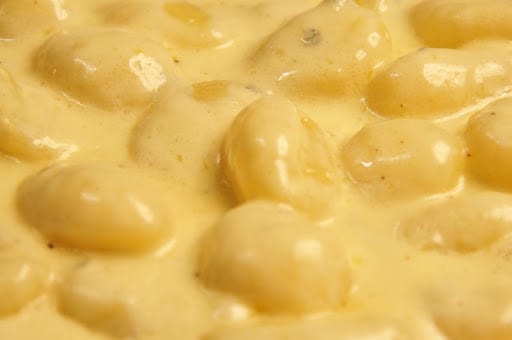 It’s Thursday, and the Romans out there will know that Thursdays in Rome (and perhaps in the rest of Italy, I’m not entirely sure…) is gnocchi day: giovedi’ gnocchi as the saying goes. Today’s offering is gnocchi with gorgonzola sauce. Here’s how you make this incredibly rich and unctuous dish:

For the gorgonzola sauce:

Bring a big pot to a boil and add your gnocchi to cook while you quickly make your sauce:

Melt the butter with the cream and let it reduce until it gets to a saucy consistency. Then lower the heat and add a good hunk of crumbled gorgonzola cheese, allow it to melt, then add your just-cooked gnocchi and let them simmer for a minute to absorb a bit of the flavor. Add a generous amount of grated parmesan cheese, mix and serve immediately. It’s that simple—if you’re using store-bought gnocchi, the dish takes about 10 minutes to make.

For me, creaminess is the essence of gnocchi with gorgonzola sauce, so when I make it, I like to ‘drown’ the gnocchi in lots of sauce. It’s a personal preference, not one that is necessary ‘doc’. The resulting dish, needless to say, is very rich, so a little bit goes a long way. It is so substantial, in fact, that it can serve as a piatto unico followed by a green salad and a piece of fruit.

Although the recipe is simplicity itself, there are a few pointers to bear in mind when making gnocchi with gorgonzola sauce. Gorgonzola comes in two varieties: gorgonzola piccante, which is aged longer, resulting in a firmer texture and sharper taste, and gorgonzola dolce which is young, creamy and quite mild in flavor. You want the dolce version for this dish if you can find it. (For some reason, it is much easier to find the piccante here in the US, just the opposite of the case in Italy.) For tonight’s dinner, however, I couldn’t find the ‘right’ kind so I settled for piccante–not quite as unctuous but it the taste was perfectly acceptable. You could experiment with other kinds of blue cheeses as well; I’ve never tried it myself but I suspect that a semi-soft cheese like morbier (removing the rind, of course) would be quite nice. In Italy, there are two kinds of cream sold: panna per cucinare (meaning ‘cooking cream’) and panna da montare (‘whipping cream’). The former is used, as the name suggests, in cooked dished that call for cream. It is quite thick and if you’re using it for this dish, there’s no need for the initial reduction mentioned above. Heavy cream sold in the States has the same texture as panna da montare. I have never seen ‘cooking cream’ here.

As with many well-known dishes, there are lots of variations on the basic recipe. For a bit of color, try adding chopped parsley or chives along with the parmesan at the very end. Gorgonzola goes very well with both walnuts and radicchio, so you can add either (or both, I suppose) to the sauce. The radicchio you would shred and saute in the butter at the outset before adding the cream. The walnuts you would chop finely and along with the gorgonzola after the cream has reduced. And a good grinding of freshly ground pepper, at the very end, makes for an ‘earthier’ dish. I have seen more ‘creative’ variations, like adding pears (another classic pairing with gorgonzola) or–believe it or not–saffron. I haven’t tried either of these, nor frankly am I particularly tempted to do so.

You can also use this gorgonzola sauce with pasta, preferably a ‘stubby’ pasta like rigatoni or penne. (I suspect that long pasta like spaghetti would tend to stick together and make for something rather gluey rather than creamy.) And, if you like, you can dot the finished dish with butter and run it under the broiler until lightly browned on top. In this case, you can substitute béchamel for the cream if you like. (This treatment works with pasta. I’ve never seen gnocchi made this way, but I suppose you could try it.)

One final thought: Italian cooking, as you may know, is very seasonal. You could make this dish any time of year, but I associate rich dishes like gnocchi with  gorgonzola sauce with cooler weather, when you crave its rich, stick-to-the-ribs quality. It would be overwhelming in warm or hot weather.For those who are in summer right now, you’d probably prefer to have something a bit lighter like gnocchi with pesto instead.