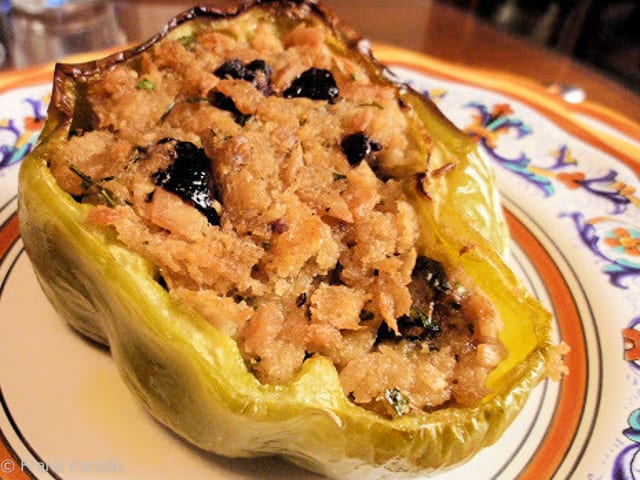 There are so many different ways to stuff a pepper. Here’s one, Tuna Stuffed Peppers, that I particularly like. Stuffed peppers are commonly used as an antipasto or part of a buffet. But, to my mind, they are substantial enough to serve as a secondo. In fact, last night they were dinner.

Get yourself some large, bell peppers, preferably red or yellow but green will do (that’s what I had on hand last night) and cut them open: either lengthwise, for a more open pepper ‘boat’, or horizontally, which makes for a cup-like container. (See notes for details.) Clean out the insides of the pepper, removing seeds and ribs, with a small paring knife, but leave the stem on to better hold the stuffing.

Then, in a large bowl, mix a small can (about 100g) of tunafish packed in oil, about 2-3 slices of bread, crust removed, soaked briefly in water and then squeezed dry and crumbled, a handful of black olives, pitted and roughly chopped, another handful of salted capers, well rinsed and squeezed dry, 2 or 3 roughly chopped anchovy fillets, a bit of chopped parsley, salt and pepper. Drizzle the mixture with enough olive oil to lightly dress the ingredients and mix again, making sure that the ingredients are well amalgamated but not entirely uniform. Adjust for seasoning: the mixture should be very savory.

Stuff the pepper halves with the tuna and bread mixture, making sure to pack the mixture in fairly tightly. Arrange the peppers on a lightly greased baking dish just large enough to hold them, drizzle them with some additional olive oil, making sure that their sides are lightly coated as well. Bake in a fairly hot oven (180 C, 375 F) for about 45-60 minutes, or until the peppers are soft and lightly spottled. Allow the pepper to cool for at last 15 minutes.  Serve, either warm or room temperature.

Tuna Stuffed Peppers is an extremely easy recipe, requiring almost no bother at all. Many stuffed pepper recipes call for you to partially roast the peppers over a flame to remove their skins. But this can soften the peppers to the point that they become difficult to handle. In this recipe, the raw pepper roasts in the oven along with the stuffing. You might think that the pepper would turn out tough, but the roasting with olive oil is enough to soften them nicely. And personally I don’t mind the slightly bitter, smokey taste of the roasted skin.

There are a number of variations for the tuna and bread stuffing. Some recipes call for bread crumbs rather than the mollica (bread with crusts removed). You can also use small pasta or rice–or even potato–instead of bread. Some call for either sauteed chopped onion or garlic, or both. Others call for only chopped olives, omitting the capers and anchovies. Still others call for green olives rather than black. But perhaps the most important variation is whether or not to add an egg or two to the stuffing mixture. This, of course, results in a much firmer, even solid, stuffing when the peppers are baked. I prefer to leave the egg out, not minding a crumbly stuffing at all–in fact, I prefer it. But try it both ways to see which you prefer.