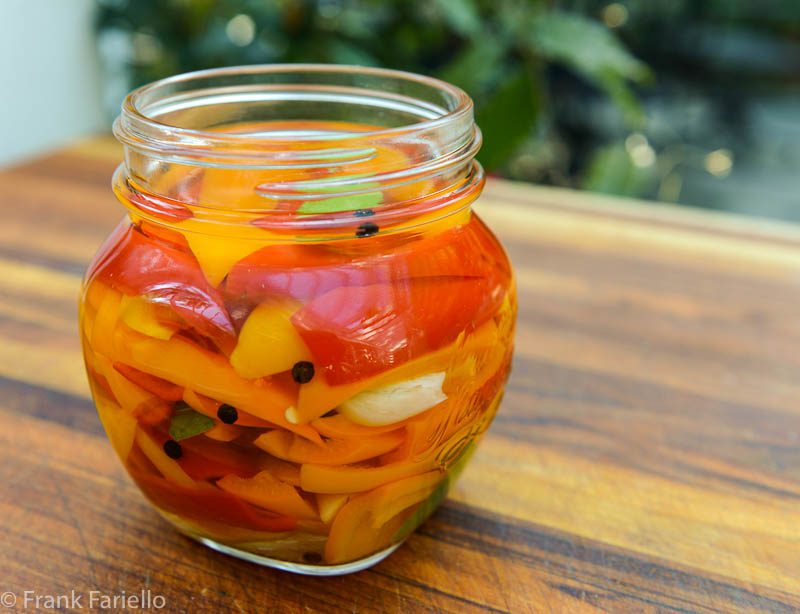 Back in the day, this was the time of year for putting up summer produce to be enjoyed during the autumn and winter. Tomatoes would be home canned, either whole or as passata. Fruits like cherries would be preserved in sugar. Eggplant and other summer vegetables would be preserved sott’olio, using olive oil to seal them off from the air, or as in today’s recipe, sott’aceto, using vinegar’s antimicrobial properties to help ward off spoilage. We’re using peppers here to illustrate, but you can preserve just about any vegetable sott’aceto, or as in the case of the ever-popular giardiniera, a whole medley of them.

Of course, we no longer need to put up vegetables at the end of their growing season. We can buy pickled, canned or frozen vegetables in the neighborhood supermarket whenever we want. And for many if not most people, it seems that the whole concept of vegetables having a “season” has been lost. You can buy fresh tomatoes, eggplants or peppers, grown in hot houses or imported from warmer climates at any time of year, even in the dead of winter. At the cost of actual flavor, to be sure, not to mention the environmental costs, and you’ll pay for the privilege. But if you want to serve asparagus on Christmas Eve, you can.

And yet, even if it’s no longer a necessity, many of us still like to put up fruits and vegetables. Preserving produce at home lets us tweak the finished product to suit our personal tastes. And contrary to popular belief, it’s really not at all difficult. In fact, it’s kind of fun.

For each medium-sized jar of pickled peppers

For pre-cooking the peppers:

Step 1: Pre-cooking: Bring the water, vinegar, bay leaf and garlic clove to a simmer in a large pot. Continue simmering for about 5 minutes.

While the pot is simmering, trim and cut the peppers into strips. (See this post for tips.)

Bring the pot from a simmer to a boil and add the peppers. Let the liquid come back to a boil, then turn off the heat. Let the peppers steep for 5 minutes. Drain the peppers and lay them out on paper towels to dry.

Step 2: Jarring: Place the pepper strips in mason jars (or in a vacuum container—see Notes) interspersed with bits of garlic, bay leaf and a few black peppercorns. (NB: Don’t fill the jar to the brim. Leave a cm or two (1/4-1/2 inch) at the top.

Cover the peppers entirely with vinegar and close tightly.

Step 3: Curing: Refrigerate or leave in a cool, dark place for at least a week before consuming. (See Notes if you want to keep the peppers for longer periods.)

Notes on the sott’aceto technique

As I mentioned in the intro, one of the advantages of home preserving is you can tweak your method and ingredients to suit your personal taste. For example, bringing the vegetable just to the boil and then letting it steep off heat produces a crisp-tender vegetable. But if you like a slightly softer texture, you can simmer the vegetable for 2-3 minutes instead. And if you like your vegetables softer still, you can just continue simmering them until they reach the degree of tenderness you prefer.

Using pure vinegar produces an assertively tangy result. Some recipes cut the acid with water, up to a 1:1 ratio. You use that same mixture for both the initial simmer and for the jarring. Try that if you want a milder flavor. You can also vary the flavorings you add along with the vinegar. A pinch of oregano or a few basil leaves, for example, are common add ins. And if you like sweet and sour flavors, a pinch of sugar (or more than a pinch) in the pickling liquid will do the trick.

Besides peppers, just about any vegetable will take to the sott’aceto technique. Zucchini, eggplant, carrots, onions, cucumbers, green beans, cauliflower, green tomatoes, artichokes… The main point to look out for is to precook each vegetable to the right degree of tenderness, which will vary from vegetable to vegetable. The boil and steep method here would be ideal for already tender zucchini. But it won’t work for harder vegetables like carrots, cauliflower or artichokes. Better to simply simmer them until they’re crisp-tender. Some vegetables don’t take very well to a sott’aceto technique, mainly tomatoes and leafy vegetables.

Traditional recipes for sott’aceti tell you to wait a month or even two before eating, in which case it’s a good idea to boil your mason jars to sterilize them before filling and then boil them again to create a vacuum seal, as described in our post on giardiniera. The boiling is a bit tricky, and you might just lose a mason jar or two to cracking.

Truth be told, though, it’s been years since I’ve made the attempt. If you’re careful about making sure the vinegar (or, for sott’olio, the oil) totally covers the vegetable, you should be OK, especially if like me you’ll be eating your sott’aceti within a couple of weeks. It’s a good idea to refrigerate them as an extra precaution against spoilage. When I want to put up food for long periods, I take advantage of modern technology and use a vacuum sealer. My new favorite is the Fresh and Save line of containers from Zwilling. They provide all the advantages of traditional canning without the trouble. 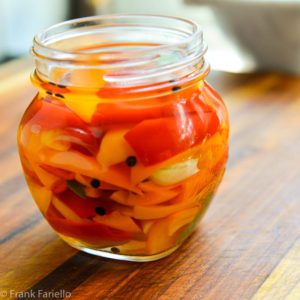