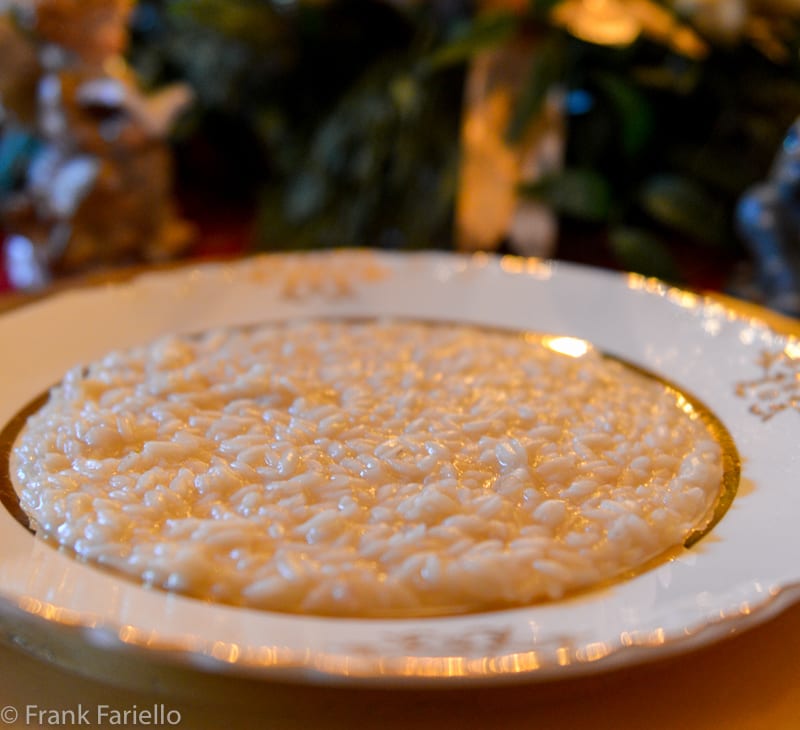 Risotto is Italy’s unique contribution to rice cookery. At its most basic, risotto is rice toasted in a flavor base of sautéed onion, then simmered in broth added ladleful by ladleful. When the rice is cooked, it is vigorously stirred with grated cheese (and sometimes butter) into a creamy and delicious mound.

Risotto is one of the most versatile of dishes. It may be even more versatile than pasta. You can use almost anything—meat, fish, shellfish, vegetables and even fruit—to flavor a risotto. To name just a few: pureed shrimp, bone marrow and saffron, Belgian endive, asparagus, pumpkin and yes, even strawberry. Indeed, it’s a great way to use up spare vegetables and other bits and pieces of leftovers.

But before we get into the fancy stuff, let’s take a look at the basic recipe:

Step 1: Make a soffritto. You begin by gently sauteeing chopped or finely sliced onion in butter and/or or oil. (Adding a pinch of salt and a drop of water softens the onions as they cook so they don’t burn.)

Step 2: Toast the rice. Add the rice and let it ‘toast’ in the soffrito for a few minutes, until the grains turn chalky white.

Step 3: Add wine. Add a splash of wine—almost always white, but red is possible in a few instances. For a very special risotto, you can use champagne. Let the wine evaporate.

Step 4: Add broth ladle by ladle. Now add the broth, ladle by ladle, allowing each ladleful of broth to evaporate before adding the next. Stir from time to time. (There are some cooks who say it’s only necessary to stir when adding the broth.) Repeat until the rice is ‘al dente‘, which should take around 20 minutes.

Step 5: ‘La mantecatura‘. When the rice is nearly cooked, take the risotto off heat. Add a generous amount of grated parmesan cheese and, if you like, a bit of butter. Stir vigorously until the rice reaches as uniform, creamy consistency. (This last step is called la mantecatura—which I might loosely translate as enrichment. By adding cheese and butter and agitating the rice kernels, you release their starch. And that’s what gives the risotto a rich, creamy texture.)

Step 6 (Optional): Rest. You should normally serve your risotto immediately. But for a slightly firmer risotto, you can cover and let it sit for a minute or two. If the risotto is too stiff for your taste, stir in a bit of hot water or broth.

The Soul of the Risotto: The Rice

Essential for a successful risotto is to choosing the right kind of rice. Here, there is simply no substitute for Italian imports, in my estimation. The creaminess of a good risotto comes from the final mantecatura rather than actual cream, which, with a few exceptions, is not something you want in your risotto.

The most common varietals are arborio, carnaroli and vialone nano. The latter two are more expensive (and can be harder to find) but are superior to Arborio in my book. I only recently discovered vialone nano, typical of Venetian risotti. It has wonderful absorptive qualities and produces a creamy, but never stodgy, risotto. If you’re living in the US, I don’t recommend using American-grown arborio rice. I’ve tried it, and it just does not give satisfactory results. I’ve also occasionally used the short-grained Spanish bomba rice, used in making paella, with good results. Avoid long grain rice, however. It may taste good, but your dish will not be a risotto. Only risotto rice will give you that creamy, undulating texture that defines a proper risotto.

Flavoring Your Risotto: The Condimento

Following this recipe, you’ll have made the most basic of all risotti, risotto in bianco or ‘white risotto’. Most risotti, however, are flavored with some other ingredient referred to in Italy as the condimento.

More often than not, the condimento, cut into small dice or thinly sliced, is added to the soffrito and gently sautéed for a few minutes so the flavors meld. Then you add the rice and proceed from there. But when the flavoring element is particularly delicate, you may want add it while the rice is cooking. You do this with peas or some seafood, for example. You may even add the condiments at the very end, just before the mantecatura. In this case, the condimento is sometimes cooked separately before being added to the rice. Finally, a fully cooked condiments can also be laid on top of the risotto, as a kind of garnish.

You have a great deal of flexibility when decided how much condimento to add your rice. Anywhere between a 1:1 to a 1:2 ratio by weight of condimento to rice will work. The amount depends on how emphatic you want to flavor the risotto and how flavorful the condimento is. I’d tend to use less meat, for example, than vegetable, or the risotto will become too heavy. You can use more of foods that tend to reduce while cooking, in particular leafy vegetables. Very strongly flavored foods like pancetta or saffron, of course, do not follow this rule; add just enough to lend flavor.

Simmering the Risotto: The Broth

One of the unique features of the risotto—the thing that distinguishes it from a pilaf, for example—is the way you cook your rice by adding liquid by the ladleful and letting it absorb before adding more. The quality of this liquid will go a long way to making your risotto sing. So whenever you can, it’s best to use homemade broth. This can be meat-based or, especially when the condimento is a vegetable or in bianco, a vegetable broth. For seafood risotti, a fish broth is, of course, an excellent choice. On the other hand, you may find it interesting that Italians will rarely use chicken broth in risotto.

And here’s another dirty little secret: although risotto will always taste better with homemade broth, if you are using a truly flavorful condimento, you can get away with using commercial broth or even water and a bouillon cube. (Shhh….!)

Whatever simmering liquid you use, the main trick for a successful risotto is the proper regulation of the heat. Cook it too fast and the inside of the rice grains will turn out chalky. Cook it too slow, and you will wind up with a stodgy mush… You want a constant but gentle simmer.

Finishing Your Risotto: The Mantecatura

The last step in making a risotto by vigorously stirring the rice usually with butter and cheese, may be the most important. It’s what gives risotto its characteristic creamy texture. There also some variations at this stage, known as the mantecatura.

For a number of risotti, especially those using slightly bitter winter vegetables like radicchio or Belgian endive, I like to add some cream (still on heat) and let it reduce before proceeding with the cheese (off heat). And a friend of mine from Milan told me that she liked to add—believe it or not—Philadelphia cream cheese in addition to the parmesan cheese to finish the dish.

For seafood risotti, you usually do not use butter or cheese at the end (it is a fairly strict rule for Italians not to mix seafood and aged cheese), but some cooks add olive oil instead to finish the dish. Personally, however, I don’t object to cream, cheese and/or butter in a shrimp risotto.

And now I’ll let you in a little secret. I’m usually too lazy to make risotto the traditional way, adding broth ladle by ladle and stirring for 20 minutes. In fact, you can make a perfectly acceptable risotto in about 5-10 minutes using a pressure cooker. Yes, that’s right, a pressure cooker.

You follow the basic recipe until it is time to add the broth. Instead of adding just a bit of borth, add enough to cover the risotto by about 1 cm or so. Bring to a full boil, stir well, then cover and bring the pot up to pressure. Lower the heat and allow it to cook under pressure for about 6-7 minutes, then release the pressure quickly. The broth should have been entirely absorbed. Continue with the dish, adding a bit more broth if the rice is still too al dente. If it’s just right, then proceed to finish off the dish (mantecare).

And with the advent of electric pressure cookers, the job is even easier. Just use the risotto function that most such cookers have and you’ll turn out a perfectly cooked risotto every time.

Risotto originated as a northern Italian peasant food. Italy is a major European rice producer. Most production takes place in the Po valley, which runs from Piemonte through Lombardy to the Veneto. (There is a great neorealismo film, by the way, called Riso Amaro, about the hard life of rice farmers in the Po Valley.) It is in this band across the top of Italy that risotto got its start, and where it is still most commonly eaten today. Milan is perhaps the ‘capital’ of the risotto, where they make it creamy but fairly firm. By contrast, in the Veneto they often make risotto almost runny. They call their way of making risotto all’onda, or ‘like a wave’, as it should flow into the plate as you serve it.

While risotto is an essentially northern Italian dish, you’ll find some risotto dishes southward. One of the classic dishes of Neapolitan cuisine is sartù di riso, a baked risotto timbale with an elaborate filling. And two wonderful risotti often appear on Roman menus. One is risotto alla crema di scampi, made with a puree of sauteed shrimp, and the other risotto nero, made with squid ink. (The latter is actually a Venetian dish, I believe.) Try both next time you’re in Italy, you won’t regret it! 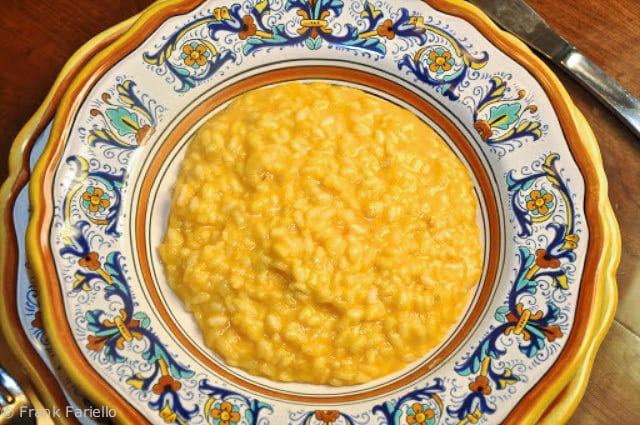 There are three kinds of rice that are suitable for making risotto: Arborio, Carnaroli and Vialone Nano. Of these, Arborio is by far the easiest to find in supermarkets outside Italy, but the other two actually make superior risotto and are worth seeking out.

If you can't find any of these, use a short or medium grained rice. If all else fails, parboiled rice can be used to make a passable, if not very authentic, dish.

8 Comments on “Risotto: The Basic Recipe”