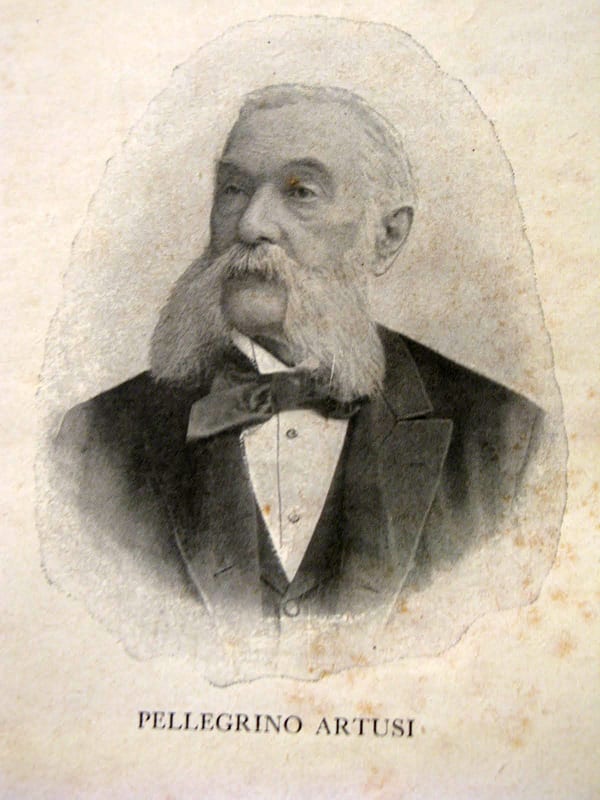 his is an Italian cookbook like no other. Artusi–it is quite common to call this book by the author’s name rather than its title–is to Italian cooking what Escoffier’s Le Guide Culinaire is to the French: indispensable.

The author, Pellegrino Artusi, was born in 1820 near Forli, in the region of Emilia-Romagna, about halfway between Bologna and Rimini. He was not a professional cook but rather a business man for most of his life, making a fortune as a silk merchant. It was after he retired in mid-life that Artusi dedicated himself to write this classic work. He finished the book in 1881 but could not find a publisher, so he used his own money to self-publish the first edition. He went on to publish 14 editions in his lifetime, selling over 200,000 copies, an incredible number for the time.Artusi is more than just a cookbook. Writing only about 10 years after the Risorgimento, the unification of Italy, Artusi assembled recipes from many different regions of the new country. His section on pastas, for example, includes tagliatelle, “maccheroni” alla napoletana, maccheroni alla bolognese, pasta con le sarde from Sicily, gnocchi alla romana, passatelli from his native Emilia-Romagna, and so on. In a sense, this book was an attempt to unify the peninsula culinarily just has it had been so recently unified politically (although his attention is not evenly divided; northern dishes far outnumber southern ones). At the time, there was really no such thing as “Italian” cooking, only cooking that was Roman, Ligurian, Neapolitan, Milanese, Bolognese, etc. Artusi even included a glossary of Tuscan cooking terms which he was not sure all Italians would understand.

At the time, Italy was also still not fully united linguistically. The Tuscan ‘vulgate’ had been chosen as the standard form of the Italian language, but most people still spoke their regional dialects. In this project, Artusi was thankfully not totally successful, as Italian cuisine remains even today quite regional–which is one reason it is so wonderfully rich.One thing I find fascinating about Artusi is that so many of his classic recipes are still enjoyed today: cappelletti in brodo, tortellini, potato gnocchi, pappardelle sulla lepre, risotto nero, frittata di cipolla, scaloppine, polpette (meatballs), osso buco, vitello tonnato, bistecca alla fiorentina, arista (a Florentine pork roast), vegetable sformati, cipolline agrodolci, piselli col prosciutto and insalata russa among many others.But there is also much in this book that illustrates the evolution of Italian cooking since Artusi’s time. He dedicates an entire chapter of this book to fried foods and another just to boiled meats, for example. (Aspics figure prominently, too.) Of course, Italians still eat all sorts of fritti and bolliti today, but you would be hard-pressed to find a modern cookbook where they figure so prominently.

His notions of nutrition reflect his times. He lists the ‘nutritive value’ of various kinds of meat (game and beef are best, fish the least nutritious, he claims) but castigates the Tuscans for being too fond of vegetables, warning that excessive vegetable consumption will give them a ‘flaccid constitution’. But perhaps we should not be too quick to dismiss Artusi’s advice, since he lived to be 91.Perhaps the evolution of Italian cuisine is most evident in Artusi’s suggested monthly menus. For a dinner in June, for example, he proposes the following:

It is the structure of this meal, more than the dishes themselves, that shows how Italian cuisine has changed. Besides the sheer number of courses, they do not follow the modern structure of antipasto, primo, secondo, contorno and dessert where each course is defined by its principal ingredient. Artusi structures his meal by cooking method: the first course is a soup (a kind of pasta in brodo), followed by a mixed fry of veal liver, sweetbreads, brain and mushrooms, then stewed pigeon with peas, then a stuffed and baked zucchini dish as a ‘tramesso’ or intermezzo, then a roast chicken with salad, then sweets (lady fingers and cherry ice cream) and finally fruits and cheeses. (People obviously had hearty appetites back then…)

These arcana not withstanding, Artusi is not just a historical curiosity. After more than a century, it is still–along with Ada Boni’s Il Talismano della Felicita’–one of the standard Italian cookbooks. No Italian cookbook collection is complete without it. Artusi has been translated into many languages, and is available in English on amazon.com. If you read Italian, the entire text is also available online at Wikisource.

﻿The Digestivo: A Beginner’s Guide to Italian After Dinner Drinks