Writing only about two decades after Artusi, another giant of Italian gastronomy, Ada Boni, produced an even more monumental work entitled Il Talismano della Felicità, literally the “Talisman of Happiness”. Unlike Artusi, who was basically a talented amateur, Ada Boni was a professional food writer. In 1915, she founded a lady’s ‘home economic’s magazine called Preziosa. Each monthly instalment featured recipes that she had collected from all over Italy, albeit with a strong emphasis on her native Lazio and central Italy more generally. In 1929, she published a compendium of over 2000 recipes from her columns–a truly encyclopedic volume that has had an enormous influence over modern Italian cuisine. (Artusi’s masterwork, by contrast, contained ‘only’ about 600 recipes.)

Boni’s was probably the first cookbook published in Italy intended specifically for housewives. Her audience was that educated upper-middle class woman of the time who may have had a housekeeper but could not necessarily afford a cook. And even in those days, this class had pretensions beyond the home. Here is the remarkable opening passage from the Forward of the first edition of her book:

Many of you, ladies, may know how to play the piano well or to sing with exquisite grace. Many of you may have prestigious degrees, may speak foreign languages or be pleasant writers or fine painters. Others of you may be master tennis or golf players, or know how to drive a luxurious automobile with a firm hand. But, alas, if you examine your conscience, I am certain that not all of you can honestly say that you know how to make a perfectly coddled egg!

The sweep of Boni’s work is truly impressive, even overwhelming. Il Talismano is organized roughly according to the usual order of a modern Italian meal:

Antipasti, including what she calls ‘complex’ antipasti–many of them like vol-au-vent, ramequins and mousse showing the strong French influence over Italian cuisine at the time–and ‘simple’ antipasti, including more typically Italian fare: olives, prosciutto, roasted peppers, hard-boiled eggs and so on.

Then a chapter of condimenti, salse e sughi–all three terms are translated as ‘sauce’ in English but mean slightly different things. Condimento literally means ‘condiment’ of course, but beware here of false friends: the verb condire in Italian means both to ‘sauce’ a pasta or other food and to ‘dress’ a salad. So this chapter includes not only things like butter maitre d’hotel but also what we today would call gorgonzola sauce for pasta and gnocchi, as well as a condimento of ricotta for pasta and the famous pesto alla genovese. (Most dishes that combine pasta with a vegetable are examples of the use of condimenti.) Salsa is the usual generic word for ‘sauce’ and includes classic French sauces like bechamel, mornay, veloute, ‘brown’ sauce, mayonnaise, hollandaise, caper sauce. None of these salse, however, are used for pasta (except for bechamel for baked pasta dishes). The word for a pasta sauce, in particular a tomato-based pasta sauce, is sugo, and Boni devotes a whole chapter to these, along with another, shorter chapter to a special sub-set of sughi known as ragu’, typically made with meat, either in a single piece or minced, and simmered for a long while. The most famous ragu’ is probably ragù alla bolognese, known in English as Bolognese sauce (which, I cannot help mentioning here, in Italy is usually used to dress egg pasta, especially tagliatelle, or short pastas like rigatoni, especially when mixed with bechamel and baked, but never with spaghetti!)

The next chapter is devoted to soups: clear broths, creme, minestre, minestroni, zuppe and zuppe di pesce. Boni explains the sometimes subtle differences among these categories. Creme are not necessarily made with cream—the word refers more to the texture of the soup, and creme are more often than not made from pureed vegetables or legumes sauteed in a soffrito and then diluted with broth, like crema di cannellini. Minestra is probably the ‘standard’ or default word for soup, often containing pasta or rice, and includes such classics and pasta e fagioli, quadrucci con piselli, pasta e ceci, minestra di riso e cicoria, stracciatella alla romana. Most people are familiar with minestroni, but perhaps fewer understand how many types there are—Boni devotes an entire chapter to the subject (and even so, only scratches the surface). Then she proceeds to zuppe, the word sounds like ‘soup’ and it does mean soup, but the particular type that includes bread. And, finally, zuppe di pesce—fish soups, a chapter that goes on for 15 pages and presents at least as many recipes.

Boni then devotes an entire chapter to fried foods like mozzarella in carrozza, fried rice balls known as suppli’ in Rome and as arancini in Sicily) as well as a whole sub-chapter fritti misti, from Emilia-Romagna, Florence, Milan, Naples and Rome, plus a fritto misto di mare. pizzas, calzoni, savory torts and egg dishes.

Then come the intermezzi—or ‘in between’ dishes, served between the primo (first course, usually a soup or pasta) and the secondo (or second course, usually of meat or fish), These intermezzi has almost disappeared from the modern Italian table in all but the most formal occasions, and include many all-but-forgotten dishes like parmigiano in budino (parmesan cheese pudding), sformati as well as souffles and vol-au-vent.

Then come pizzas, calzoni and savory torts, including the classic pizza margherita and many others. The savory torts include the famous torta pasqualina alla genovese (Genoese Easter spinach pie) and various torte rustiche.

Then come the egg dishes—starting, of course, with frittate of all kinds, but including the lesser known frittatine, or ‘little frittatas’, fried on both sides like a frittata but including a batter made from milk and flour, which gives the frittatine a lighter texture not unlike quiche. Several omelettes, in the French style, follow, together with poached, shirred and fried eggs (there’s even a recipe for fried eggs and bacon!) plus eggs mollette (soft boiled eggs) and finally, hard boiled eggs. Among the egg recipes you’ll find uova fritta all’americana—although I doubt many Americans would find it familiar: eggs and ham in tomato sauce.

Seafood dishes follow, including the ever-popular baccalà, made in 13 different ways, then eel, all sorts of finny fishes—fried, baked, grilled, poached, simmered in tomato sauce—then crustaceans, mollusks—squid and octopus, of course—and snails.

Salads, vegetable and bean dishes follow in the next chapter. then fruits, then desserts: cakes, pastries, pies, ice cream… 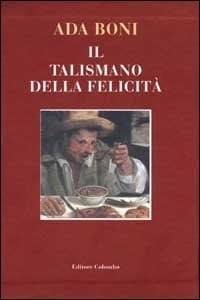 Suffice it to say, Il Talismano covers the length and breadth of Italian cookery. While Artusi is clearly a work from another time, in Boni’s recipe you see Italian cuisine, as we know it today, clearly taking shape. The recipes, too, are more modern: they give measurements–precise ones by Italian standards–cooking times and detailed instructions. Artusi, in more traditional Italian style, will tell you to being by making a soffrito with onion and “the other requisite ingredients”–assuming you know what these are–Boni assumes nothing, taking you by the hand and leading you through the cooking process. No wonder that Il Talismano remains a standard cookbook for home cooks in Italy today, with a status similar to The Joy of Cooking in the US. It is (or traditionally was) the gift that mothers-in-law gave to newly wed brides, in the hopes that she would learn to feed her son well… (And you’d better believe that Angelina gave my mother a copy, too, when she married my father!) It is not an exaggeration to say that you can find Il Talismano in just about every Italian kitchen.

Il Talismano–or a version of it–can be found in English. It goes by the name of The Talisman Italian Cookbook and is available from amazon.com and other outlets. Unfortunately, however, the book is much abridged (300 pages as opposed to the original 1053) and contains additional, unauthentic recipes of the Italian-American variety, which the American publishers thought were needed to attract readership. Still, it’s worth a buy.

Post-scriptum: As encyclopedic as Il Talismano was, Ada Boni went on to publish more cookbooks in her lifetime, notably La cucina regionale italiana, Italian Regional Cooking, and an ode to the cuisine of her native Rome, La cucina romana. Here monthly Preziosa continued to publish until 1959. She died in 1973, at the age of 82.

What motivated Ada Boni to produce such a prodigiuos body of work? As the title of her masterwork suggests, she was motivated by a desire to promote happiness since, in her own words:

There can be no true happiness if such an essential part of our daily lives as eating is neglected. Cooking is the most gay of arts and the most pleasant of sciences.