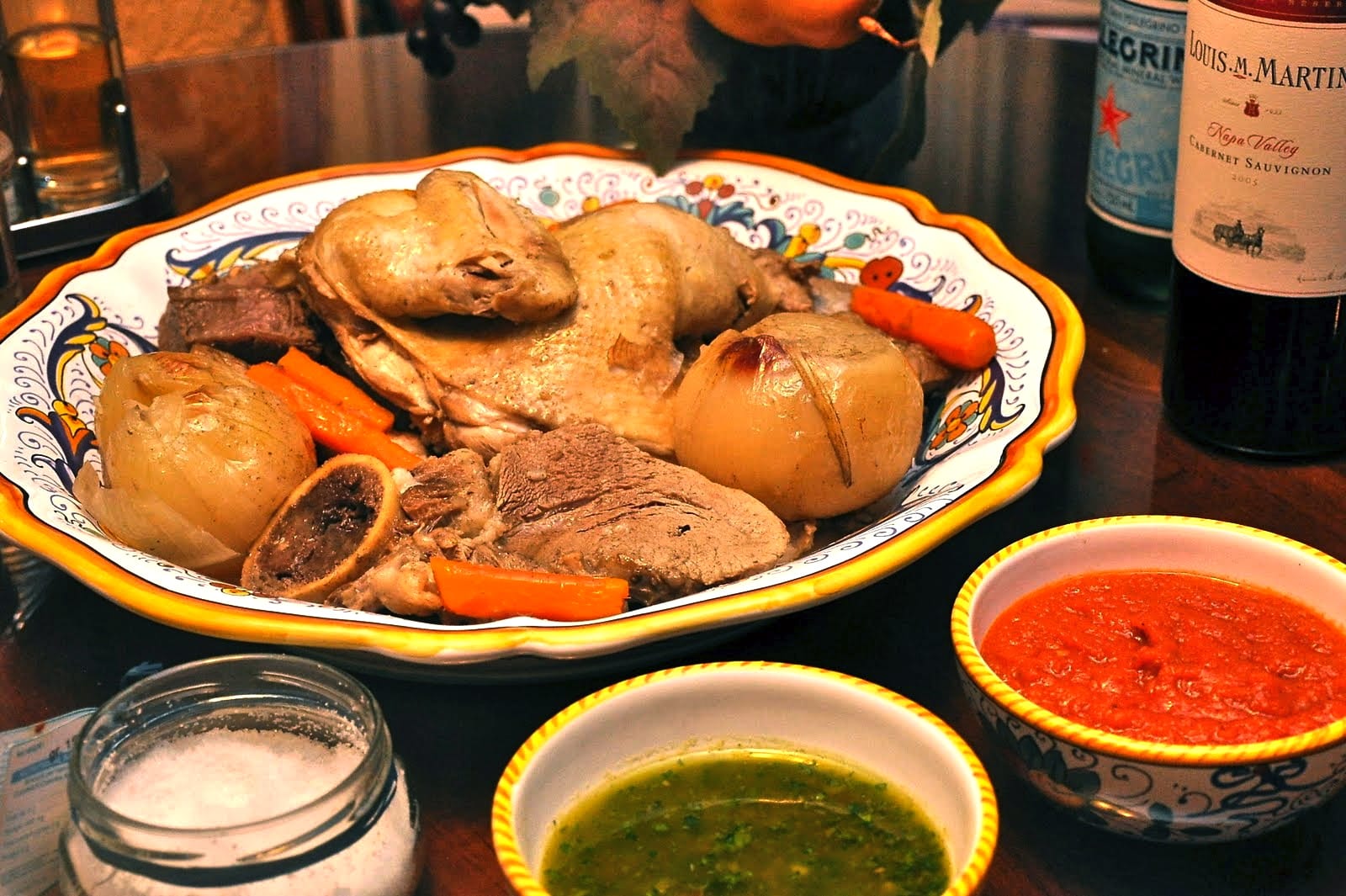 Some of our favorite Sunday meals during the cold weather months are boiled dinners. I usually make homemade broth in the afternoon and, not wanting anything to go to waste, the boiled meat and vegetables that went into the pot are usually dinner that night.

If you’ve made the broth with beef, you’ll have lesso di manzo, also known as bollito di manzo. (The verbs lessare and bollire both mean ‘boil’.) If you’ve used chicken, pollo lessato. And, if you want to serve one of the great classic dishes of northern Italian cooking, you can try bollito misto–made with beef, chicken or capon, veal breast, veal tongue, and/or calf’s head, pig’s foot, and one of two sausages originally from Modena, called cotechino and zampone, (often eaten with lentils on New Year’s Eve, but that’s another story). The sausages have a strong taste, so you should boil them separately. They can be hard to find outside Italy but available (sometimes) online or in the better Italian food shops, especially around holiday time. In Italy, you’ll find them in every supermarket in December, pre-cooked and vacuum packed–just heat and serve.

A classic accompaniment is mostarda di cremona, a medieval concoction of candied fruits made with a bit of mustard seed, which gives it a sweet and spicy taste. Very unusual for the modern palate, but I really like it. If you can’t find mostarda, as odd as it might sound, chutney makes for a great substitute.

By the way, if the main point of your exercise is to serve the meats, you should vary the recipe for broth a bit: first, simmer the vegetables for about an hour or so before adding the meat(s). This creates a kind of court bouillon that will flavor the meat, and adding the meat to the already simmering water will allow the meat to retain more of its own flavor rather than lending it to the broth. And you may want to take more care about the cooking times of the different cuts of meat, especially with the chicken and any other poultry, than you would  when making broth. You can hold back the quicker cooking meats, for which you’ll need to calculate backwards: so if your beef will take about 3 hours to cook, for example, wait two hours before adding the chicken, which will generally take about an hour. In the alternative, and a perhaps a bit simpler, you can always take out some pieces when they’re done cooking and return them to the pot when everything else if cooked. If you want to eat the vegetables, too, you can add them about an hour before the end of the cooking time rather than pre-cooking them, but remember always to bring the water to the simmer before you add the meat. By the way, don’t be misled by the name ‘boiled dinner’: you should not literally boil the meats and vegetables; besides clouding the broth, hard boiling will tend to toughen the meats.

Bollito is the ultimate make-ahead meal; just let it sit (uncovered) and reheat gently whenever you’re ready to eat.

In fancy restaurants, bollito is often served from a cart in which the various cuts of meat are still swimming in their cooking broth, in various compartments, and slices are carved for your at tableside. This ensures that the meats are still warm and moist when you eat them. Of course, this is not practical for the home cook, so I generally serve my bollito is large pieces in a large, heated serving bowl, with various ladlefuls of broth on top to keep it moist.

Bollito is almost invariably served with one or more sauces. My favorite is salsa verde or green sauce. It was laborious to make in the old days when the use of a mortar and pestle was obligatory. These days, using a blender or food processor, it’s very easy: you whiz together garlic, capers, anchovies, lots of parsley, vinegar and olive oil, season with salt and pepper to taste. If you like a little heat (and in our house we generally do) add some red pepper flakes. Some variations call for cornichons, and I add them on occasion. The texture should be smooth and saucy, but not a puree, each of the elements should be identifiable, so don’t overblend. If it’s too thick, add more oil until it reaches a ‘saucy’ consistency. Another typical sauce for bollito (which I don’t like nearly as much) is salsa rossa made by simmering tomatoes with a soffritto of onions and red bell pepper until well reduced (about 15-20 minutes), passing it through a food mill or blending it, and then simmering the resulting puree with some vinegar and sugar to give it a slightly sweet and sour taste. Another popular sauce, from Verona, is called peara’, made with bread crumbs sauteed in butter and bone marrow, adding broth and lots of freshly ground pepper until it swells and becomes smooth. It’s wonderfully unctuous.

If you’re feeling in an austere mood, you can always enjoy your bollito simply with some sale grosso (coarse sea salt).

Bollito misto is a meal in itself, but is often accompanied by mashed potatoes. Being the frugal folks, in our house we often just serve the vegetables that cooked with the meats. If you’re really hungry, a classic first course to precede a bollito is tortellini in brodo, made, of course, with the broth from the bollito itself. The classic wine to drink with bollito is a dry Lambrusco, although I find it goes well with many different red wines, so long as they’re not too heavy, like a Bardolino or a Pinot Noir.

Boiled meats were once a common thing, and many recipes have developed over the years for using leftovers in various forms of lesso rifatto, in which the leftover meat is braised with other ingredients, often with onions and/or tomato sauce. Although not particularly Italian, I love to use leftover boiled chicken to make creamed chicken over rice. And leftover boiled meats also make their way into salads, croquettes, and stuffings for ravioli…

Italians are hardly the only ones who make boiled dinners. It is, I would dare say, almost universal. Here in America, corned beef and cabbage is a venerable, if disappearing, form of the boiled dinner. Add other root vegetables like onions, carrots, turnip, rutabagas, potatoes and parsnips and you have a New England Boiled Dinner (see photo). An equally good—in my opinion, even better—version is made with a picnic pork shoulder instead of the corned beef.

The New England Boiled Dinner is traditionally served with mustard or horseradish sauce, but since my significant other doesn’t care for either mustard or horseradish, I tried to come up with an alternative. Believe it or not, I decided to try Green Goddess Dressing! Sounds bizarre until you realize that homemade Green Goddess Dressing is basically an Italian salsa verde made with sour cream and/or mayo instead of olive oil. And the experiment worked very well, if I do say so myself.

There are many other versions of the boiled dinner, from the French poule au pot (boiled chicken) and pot au feu, made from beef shank, ribs and marrowbones, often boiled in broth rather than water for a richer flavor, and served with coarse salt and cornichons, to the Spanish cocido and the Portuguese cozido, to the puchero popular in Argentina and Uruguay, to the Irish Boiled Dinner, very close to the New England Boiled Dinner, to the Japanese shabu-shabu or the Chinese Mongolian Hot Pot As far as I’m concerned, they’re all wonderful!

One last tip: If you want to cut down on the time, you can use a pressure cooker. It’ll need to be a large one, of course, big enough to hold all the meats, vegetable and water. You need to boil and skim at the beginning, as you would for a normal broth, then rather than lowering the temperature to a gentle simmer, you cover and let the pressure rise. Figure about 1/3 the time that it would normally take (15-30 minutes for chicken, 1 hour for beef). The result is not quite the same, I’m sorry to say, but acceptable. In such cases, I often allow the broth to simmer for 20-30 minutes after you’ve released the pressure, which gives it a bit more flavor.

6 Comments on “Bollito and other boiled dinners”