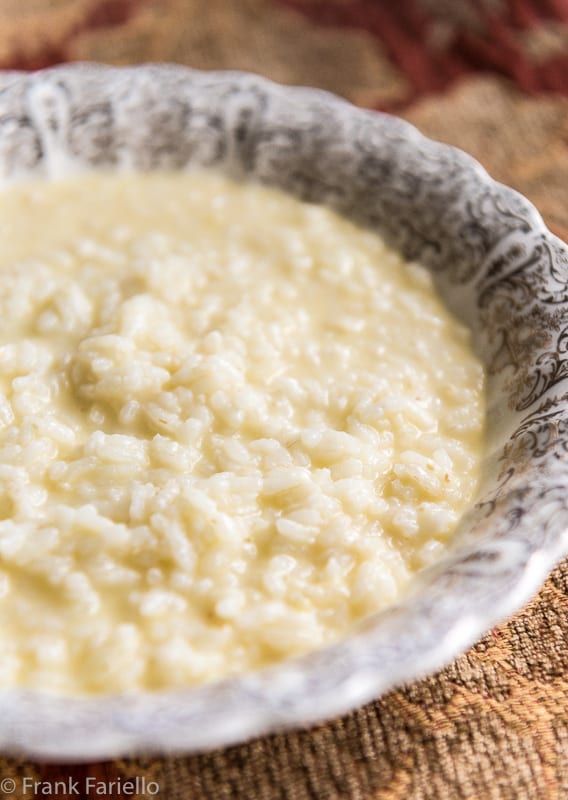 I was an atypical child. The other kids would come home from school and happily eat their milk and cookies, but I hated milk and didn’t care much for sweets. My idea of an after-school snack was a bowl of rice mixed with lots of butter and cheese. I would make it myself and happily sit down to watch TV. That dish—which I thought I had invented—launched my culinary career.

Well, as it turns out, I didn’t invent the dish. Rice with butter and cheese, called riso in cagnone, is a rustic dish from northern Italy. There are two versions of the dish. One is from Lombardy, where rice in boiled in salted water, then topped with butter browned with garlic and sage, along with generous dusting of grated Parmesan or grana padano. The other, which we are featuring today, is from Piemonte, where the boiled rice is vigorously stirred with a local semi-hard cheese and melted butter. While not a proper risotto, this finishing mantecatura gives this version of riso in cagnone a similar creamy deliciousness.

It just goes to show that there really is nothing new under the sun.

Boil the rice in well salted water until it is cooked al dente, about 15 minutes.

While the rice is boiling, melt the butter in a small skillet, letting it turn a hazelnut brown but taking care not to let it burn.

Drain the rice, but not too well, and transfer it into a warmed bowl (or back into the still-warm pot). Add the cheese and melted butter, mix everything together very vigorously until the cheese has melted entirely and the mixture is uniform and creamy.

Notes on Riso in cagnone

The cheese is the essence of this dish, of course. In Piemonte the typical choice would be a toma, the Piedmontese member of a family of cheeses also made in France and Switzerland known Stateside by its French name tommes. And the ne plus ultra of toma cheeses is apparently from the little town of Maccagno, on the shores of the Lago Maggiore in the province of Varese. The name Maccagno brought a smile to my face, since the family name of one of my best college buddies was Maccagno. I knew his family was from Piemonte on his father’s side—and now I guess I know exactly where.

Italian toma is hard to find Stateside, and Maccagno pretty much impossible. (Toma can be ordered online from Murray’s Cheese Shop in New York.) I would think a tomme from Savoie, slightly easier to find than toma, would also do well as a substitute. Personally, I opt for other meltable Alpine cheeses like comté, gruyère (groviera) or Italian fontina, all of which are readily available at better supermarkets. Look for a cheese that is not overly aged, as they tend not to melt very well, but not so young that they haven’t had time to develop good flavor.

You want to avoid generic supermarket “Swiss” cheese if you can. It has practically no flavor at all. But if that’s all you can find, you could improve it by mixing in a bit of Parmesan for extra flavor. And really, although you’d be straying pretty far from the original recipe, any good quality, flavorful meltable cheese would work here. When I was a kid, I often used cheddar for my afternoon snack, and it was very good.

As for the rice, a risotto rice like Carnaroli or Arborio, or even a Vialone nano, would be ideal for the Piedmontese version as it creams up nicely. But really just about any varietal of rice would work.

As for many popular dishes like this, the measurements are pretty open. The amount of cheese and rice indicated above produces a dish of medium richness, but you could easily double both for a really sumptuous result.

To make the version of riso in cagnone from Lombardy, brown the butter with one (or more) cloves of garlic, along with a sprig of fresh sage, until hazelnut brown. Again, take care not to let the butter burn. Remove the garlic and sage when you’re done. When the rice is cooked, serve it still piping hot on individual plates (or in a communal serving bowl), top with a generous dusting of grated Parmesan or grana padano cheese, then pour over the browned butter.

Although the basic ingredients are similar, you’ll be amazed at how different the two versions are. While the Piedmontese version is creamy and warming, in the Lombard version the rice remains more separate and the result is rather more savory. Both versions have their charms. The Piedmontese version is closer to the dish I “invented” as a kid, so it has my sentimental vote.

How Riso in cagnone got its name

The most popular story about the name riso in cagnone relates to its appearance. The little grains of rice are said to resemble insect larvae, called cagnotti in local dialect. According to another story, the name comes from the name of the town, Ma-CCAGNO, where the most typical cheese used to make it is made. Yet another relates to a colloquial use of the word cagnoni to mean “well off”, so riso in cagnoni would mean “Rich Man’s Rice”.

Print
Yum
Riso in cagnone (Rice with Butter and Cheese)

Yield: For each serving 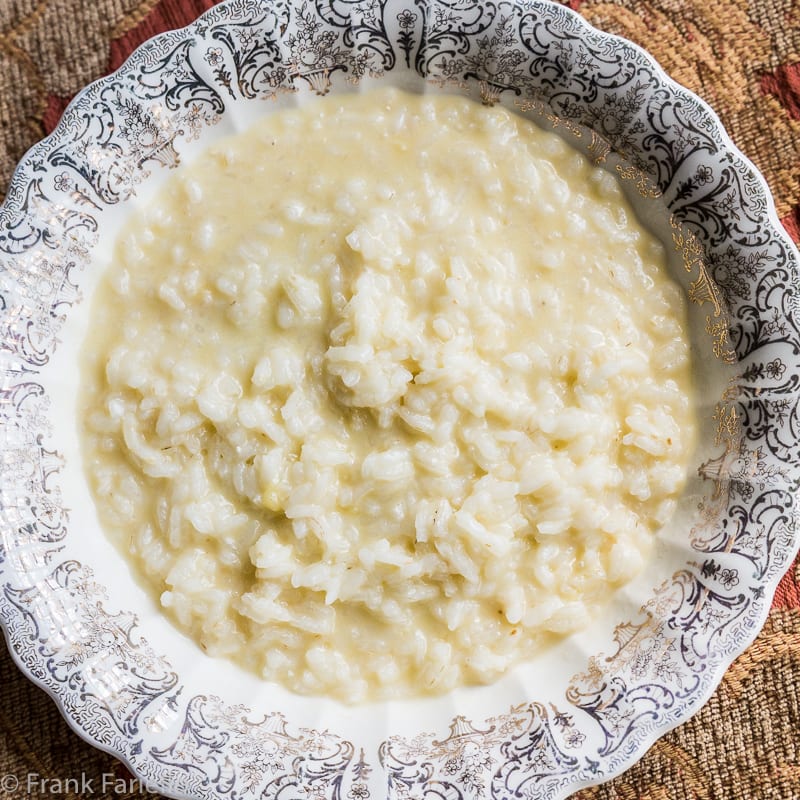 38 Comments on “Riso in cagnone (Rice with Butter and Cheese)”