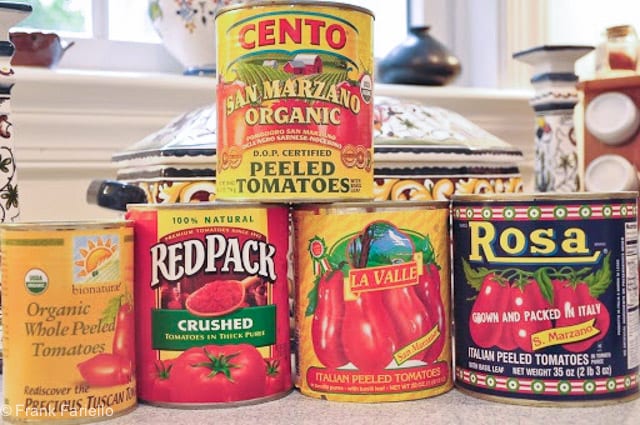 Update: The top rated brand in this post, Cento, no longer sells DOP San Marzanos. But the information about identifying good quality tomatoes is as relevant as ever. And I’m happy to recommend the other brands mentioned in this post.

Here’s a special note for readers in the US, where buying canned tomatoes can be tricky thing. When I first moved back from Italy, I ran into all sorts of trouble trying to find a brand of canned tomatoes that ‘behaved’ properly. The main problem being that, for some reason I could not fathom, no matter how much I cooked the canned tomatoes, they never seemed to ‘melt’ as they should into a sauce. My Italian friends all had the same problem and didn’t understand why American tomatoes were so different. I then found out that Americans apparently prefer their canned tomatoes that way, so manufacturers actually add a chemical called calcium chloride to canned tomatoes to prevent them from melting! Of course, when you are using canned tomatoes to make a sauce, firmness (especially artificially induced firmness) is not a positive quality.

The other problem is that canned tomatoes made in the US often have an ‘off’ taste, which I would describe as sort of ‘stewy’. That I don’t have an explanation for, but just know that you’ll need to pick and choose carefully if you want your tomato sauces and other tomato-based dishes to taste as they should.

After much trial and error, with one exception—see PS below—I now stick to certain brands of imported Italian canned tomatoes. The best brand I have found here in the US so far is Cento Organic DOP Certified San Marzano tomatoes. As you might know, San Marzano tomatoes, grown in a defined area close to Naples, are considered the finest in Italy, if not the world, particularly for making sauces. (Never mind that the little red farmhouse on the label looks like it belongs in Pennsylvania!) [NB: Unfortunately, it would seem that this product line has been discontinued and replaced by a Cento Certified San Marzano line, which are grown close to the area but not within the DOP perimeter; they’re not bad and less expensive, but not the real deal.] Also quite good are the brands called “Rosa” and “La Valle” which both sell imported San Marzano peeled tomatoes—buy the ones that are ‘DOP’ certified if you can find them. Bionaturae‘s Organic Whole Peeled Tomatoes from Tuscany are also quite acceptable.

But even buying imported Italian canned tomatoes is not a panacea. For reasons apparently having to do with US tariffs, almost all Italian canned tomatoes imported into the US come packed in purée rather than simple juice as they are in Italy, so what you get is rather too thick to cook with and needs to be diluted with a bit of water when cooking. Their taste is, unfortunately, not quite as pure as it should be because of the purée, but it is better than having chunks of raw canned tomato in your sauce! (I realize that some people actually like chunky tomato sauce, but that is not what you want in Italian cooking.)

Update:: If you’re willing to pay a fairly hefty premium and the shipping, you can order imported Italian tomatoes from Gustiamo.com packed as they are in Italy in tomato juice, not the purée.

If you either can’t find or don’t want to spend extra on imported tomatoes—the good ones are not cheap—look either for canned tomatoes without calcium chloride added, just salt, basil and juice, usually called “Italian style“. Or look for crushed tomatoes, which gets around the ‘melting’ issue. Among the US brands, “Redpack” crushed tomatoes, which is the kind that Angelina used—are pretty good, especially for robust sauces like ragù. I recently tried some US made “Colavita” crushed tomatoes and found them not bad. And be careful about tomatoes marked as “San Marzano”: some sold here in the US are actually not from Italy at all but are simply the San Marzano varietal of tomato grown here. Somehow, they don’t taste the same.

One brand that I unfortunately would not recommend, at least for Italian dishes, is Glen Muir. I had high hopes for their easy-to-find line of organic products but, alas, notwithstanding Cook Illustrated’s endorsement, the sample I tried suffered from that funny ‘stewy’ taste. I have heard good things about their roasted tomatoes, but they are not really appropriate for everyday Italian cooking.

Some readers have wrote in with some of their favorite brands: a ‘Foodbuzz’ friend from Italy recommends DOP San Marzano tomatoes from Gerardo di Nola, the renowned pasta-maker. I have not seen them myself here in the US, but a quick internet search shows that there is at least one store in New York that sells them (not sure they ship). Some readers from the US recommend the “Nina” and “Pastene” brands, both imported San Marzano from Italy. (“Nina” brand is available from Costco. I have not seen Pastene where I live, but it is available from various purveyors online.

I’ve recently (2019) discovered a US brand of canned tomatoes that I can recommend as heartily as imported Italian: it’s called First Field, and they’re excellent New Jersey tomatoes. You can buy them in Whole Foods, but unfortunately the supply seems to be limited, so you may or may not find them on the shelves on any given day. Stick to the BPA-free canned tomatoes. The passata for whatever reasons, isn’t quite as good. And, as I’ve written before, there’s no reason to buy commercial marinara sauce.