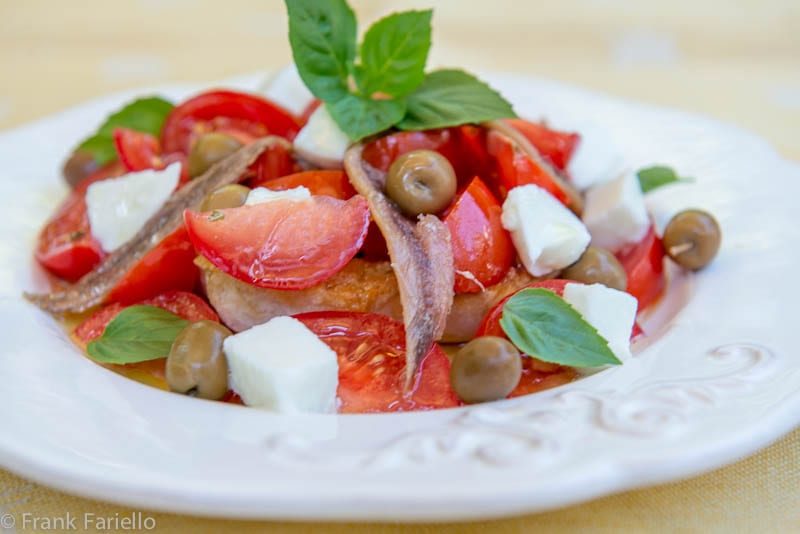 Italian cookery can be confusing. As we’ve talked about before, it’s highly regional and even local, so much so that some people say that there is no such thing as Italian cuisine. I don’t agree, but it is true that there are amazing differences between regions, especially as you travel from north to south. And that variety includes many contradictions, especially in the names given to food.

Pasta shapes are notoriously confusing: the same shape can have several different names depending on where you are. Those little tubular pasta shapes used for pasta e piselli, for example, can be called tubetti, ditali or ditalini depending on where you are; the pasta called bucatini in Rome are called perciatelli in Naples, the square spaghetti called spaghetti alla chitarra in Abruzzo are called tonnarelli in Rome, and so on.  And, what’s more, different pasta shapes can also share the same name: Just think how many different pasta shapes are called strozzapreti or strangulapreti (“priest stranglers”) …

A caponata by any other name would taste as good…

And so it is with other foods. A case in point is caponata. When most people hear that word, they think of Sicilian caponata, one of the best known dishes in the entire Italian repertoire. But the Neapolitans also have their own caponata napoletana, and it’s actually nothing like its Sicilian namesake—but actually a kind of bread-based salad closer to bruschetta or panzanella.

Caponata napoletana is an incredibly simple dish, but it does call for an unusual ingredient, a kind of twice baked doughnut-shaped bread that looks a lot like a toasted bagel called friselle or freselle (see Notes). Each frisella is soaked briefly to soften it a bit, then topped with tomato salad and, if you’re in the mood, other savories like olives, anchovies, mozzarella and crumbled tunafish.

Caponata napoletana makes for a great antipasto or—if you add lots of those extra toppings—a light summer supper. It’s especially welcome on those days when it’s too hot to even think about lighting the stove. Or when you just don’t feel like cooking.

About a half hour before you’re ready to eat, take your friselle, dip them briefly in tepid water and place them on individual plates.   Pour some olive oil over each frisella.

Now prepare a tomato salad with the tomatoes, olive oil, oregano, salt and pepper, and spoon some of the salad onto each plate, covering the top of the frisella.

Now you can add whatever other toppings strike your fancy. Let rest until you’re ready to eat.

Just before serving, drizzle a bit more olive oil over each plate. 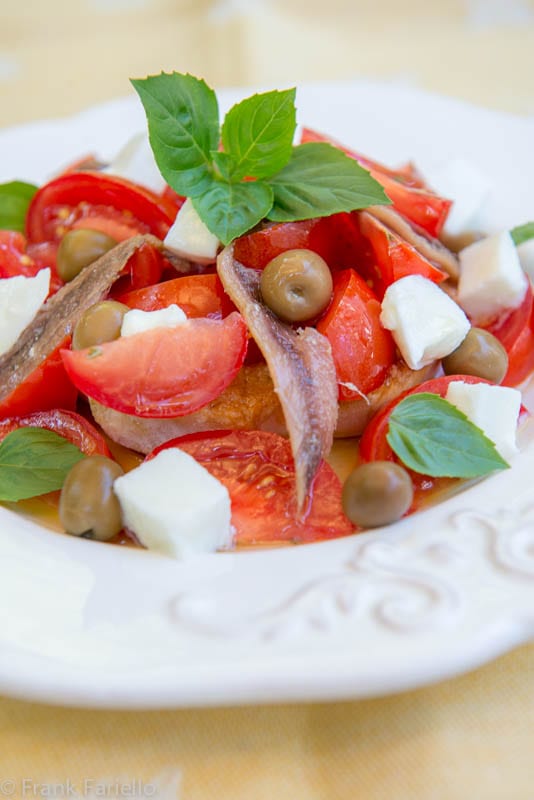 The typical base for making caponata napoletana are friselle, also called freselle, a kind of ring-shaped bread that are partially baked, then split in two horizontally to continue baking until golden brown all over. This two-step baking process removes any trace of moisture from their crumb, so they last indefinitely. The history of friselle goes back a long time, at least to the Middle Ages. They were originally meant for soldiers, pilgrims, fisherfolk and others who would be away from home for extended periods. The dry bread would be reconstituted as needed with water, a bit like hardtack for sailors. (But don’t worry, unlike hardtack, they’re relatively crisp and light.) Their doughnut/bagel-like shape allowed them to be strung together through the middle hole for easy storage and transportation. Besides Campania, friselle are made in most of southern Italy, in particular in Puglia—which is actually where they originated—as well as Calabria, where they are called frese. 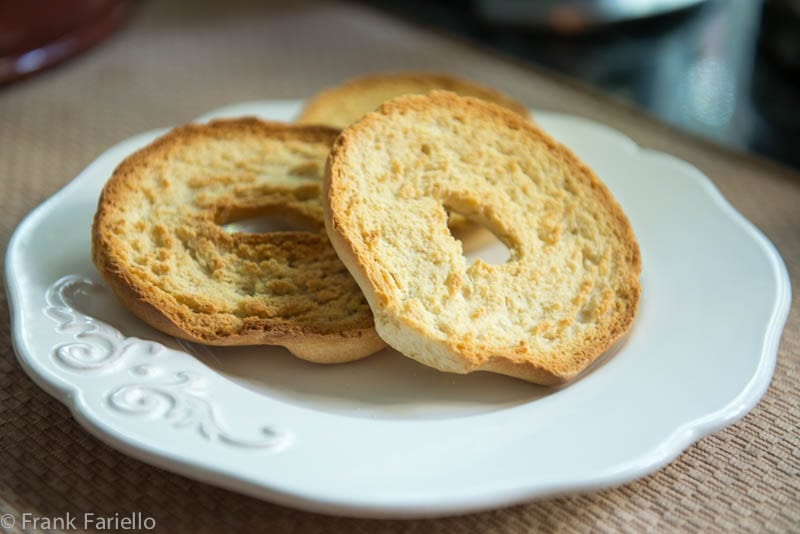 Sadly, friselle can be hard to find these days. Even my local Italian deli no longer carries them—the manager explained to me that they just aren’t in demand any more. If you live in an area with a sizable Italian-American community, you may have better luck. If not, they can be purchased online. Or you can make them yourself—and they’re actually pretty easy to make, as explained in this post by fellow food blogger Vincent Scordo.

Otherwise, you can make a perfectly acceptable caponata napoletana by substituting other kinds of bread—day old bread that you bake in the oven until brown, for example, should work well.  I’ve seen Italian recipes calling for those slices of pre-made toasted bread that Italians call ‘fette biscottate‘. And although they’re very different in texture, you might even try making caponata napoletana with an actual toasted bagel.

As for any dish as simple as caponata napoletana—and especially using uncooked ingredients—quality is crucial, especially the tomatoes. The dish is at its best this time of year, when the markets are full of tomatoes that are ripe and luscious and full of flavor. The olive oil should be very fruity in the southern Italian style, the best you can afford. And the quality of the optional ingredients—mozzarella, anchovies, olives, tuna—all make a difference, too, if you’re using them. The mozzarella need not be di bufala but it should be fresh. It’s best to let the cut mozzarella drain for a few minutes before using it. This avoids their milk running into the rest of the dish. Salted anchovies will taste better than those in olive oil, and those in jars are generally better than canned. The loose olives you can buy at better supermarkets are almost always better than the kind you buy in jars. And best-quality tuna from Portugal or Italy, while expensive, is well worth it when served like this.