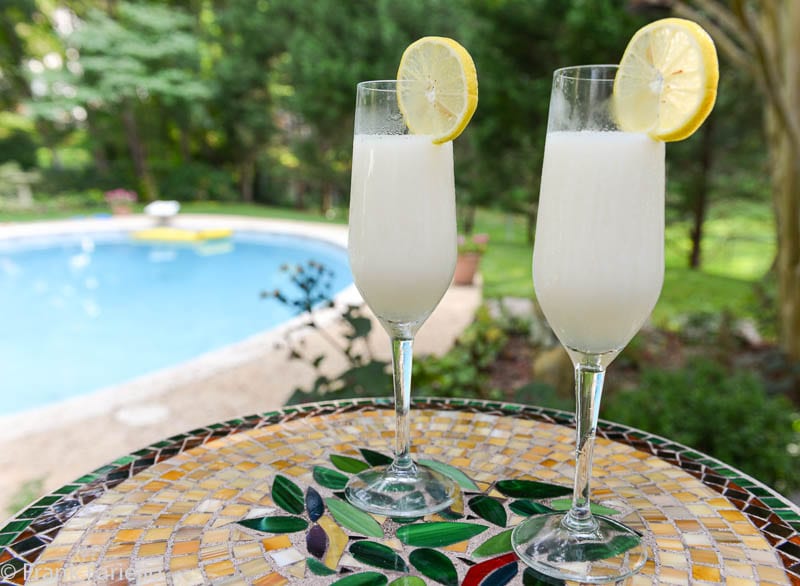 This Venetian invention is often described in English language sources as a “cocktail” but it’s actually sorbet, whipped together with champagne and vodka to form a kind of cold mousse. Originally intended as a palate cleanser between courses of an important dinner, today a sgroppino is typically served as dessert/digestivo at the end of the meal, in particular if it’s fish based. Some people—and you know who you are— serve it as an aperitivo.

Whenever you choose to serve it, one thing is certain: A sgroppino is refreshing and cooling experience, particularly welcome during the dog days of summer.

Take the sorbet out of the freezer and let it sit out for about 5 minutes to soften a bit.

Add the sorbet to the bowl of a standing mixer. Using the whisk, start the mixer at moderate speed to start breaking up the sorbet.

Add the vodka and let the mixer continue running until the vodka is completely absorbed, then increase the speed and drizzle in the Prosecco until you have a perfectly smooth, fluffy mousse.

Serve your sgroppino right away, in champagne flutes, garnished with a lemon slice.

To my taste, a properly made sgroppino should be soft, but not liquid. Although it might (just) be pourable, you should eat it with a spoon rather than drink it. You need to be be quick to make and serve your sgroppino to avoid it melting and losing its mouse-like qualities. But I have certainly seen versions of sgroppino that are liquid enough to truly qualify as a cocktail.

Most recipes call for using sorbet fresh out of the freezer, mixed with the liquors in a blender, a bit like a frozen margarita. But personally, I find the standing mixer method presented here produces a more pleasant, fluffier result than using blender.

Perhaps the most common variation is to use lemon ice cream instead of lemon sorbet. (Some sources claim this was the original recipe.) Another common variation calls for limoncello instead of (or in addition to) the vodka which, of course, will make your sgroppino even more lemon-y. If you prefer a less alcoholic sgroppino, you can forgo the vodka. On the other hand, a particularly boozy version calls for vodka and just vodka. I’ve seen versions (in the US) where the sgroppino is a kind of float, where the sorbet is scoop is plopped into a glass and topped up (not mixed) with the vodka and Prosecco. Some recipes call for topping your sgroppino with mixed fruit.

Although it’s not idea, I’ve successfully made sgroppino a few hours ahead. You put it in a container and into the freezer. When you’re ready to serve, take it out of the freezer and put it back into the mixer bowl. Whisk it briskly for just a few moments, until it regains its mousse-like appearance. The texture isn’t quite as smooth and fluffy as a freshly made sgroppino, but it’s quite acceptable all the same.