While Sundays dinners at Angelina’s house were once-a-week, belly-busting, meaty affairs, she practically lived on vegetables during the week. This was long before vegetarianism or veganism went mainstream and she would not have thought of herself as a ‘weekday vegetarian’ or anything of that sort. It was just the way that she grew up eating in a family of modest means living in small southern Italian village. But frugality had its benefits, and surely diet was one reason Angelina lived to be 98 years old.

In any event, when I was growing up one of my favorite vegetable dishes in Angelina’s repertoire were these Green Beans in Tomato Sauce. It’s a classic side dish—one of the most ubiquitous in the Italian repertoire—that can accompany just about any main dish but is especially wonderful with grilled or roasted meats. But I think it’s tasty enough to serve as a light vegan main course.

You start, as so often, with a soffritto of onion and/or garlic sautéed in olive oil. Then you add best quality canned tomatoes, crushed in your hands, and allow them to simmer.

Meanwhile, blanch your trimmed green beans in abundant, well-salted water until crisp-tender, drain and add them to the tomato sauce along with some of their cooking water and allow them to simmer in the sauce until quite tender.

Green beans in tomato sauce can be served right away, but they are also nice at room temperature or made ahead and reheated.

This recipe is quite forgiving, and even green beans of indifferent quality will turn out nicely. In fact, if anything, I find that regular ‘garden variety’ green beans turn out better cooked this way than the fancier—and more expensive—French green beans. (French green beans, on the other hand, are preferable when making fagiolini all’agro, where their tenderness and delicate flavor can really shine.) If you can find them, the extra long string beans sometimes sold in Asian markets in the US, known in Italy as serpenti, are especially nice.

It is important to cook the green beans to the right degree of doneness. They should fully cooked, not crisp-tender, with no trace of that green bean raw taste, but not overcooked and soggy either. It is impossible to give a standard cooking time, since it varies wildly according to the freshness and thickness of the beans, anywhere between 10 minutes for very tender young green beans to 30 minutes or more for more mature ones.

Angelina would vary her Green Beans in Tomato Sauce from time to time by adding other vegetables to simmer along with the green beans, typically sliced carrots, cubed potatoes or boiled (or fresh) cranberry beans. In the summer, adding a few leaves of basil give the dish a nice fresh taste. Another variable is the ‘sauciness’ of the dish. Angelina’s version of this dish was actually quite brothy, with lots of rather thin tomato sauce to sop up with bread. In modern-day Italy, however, where this dish is a standard contorno, it is customary to reduce the sauce down until the dish is almost dry. And while Angelina’s version was obviously Neapolitan, in Tuscany they also make fagiolini in umido, but with a soffritto of onion, carrot and celery rather than onion and garlic.

Some recipes call for adding the raw green beans directly into the simmering tomato sauce, rather than putting them through an initial blanching. I’ve tried it both ways and, for reasons I cannot really explain, the blanching really does result in finer flavor and texture.

Green Beans in Tomato Sauce is typically a side dish or contorno, but like Angelina I sometimes eat just this, with some crusty bread, as a light supper. 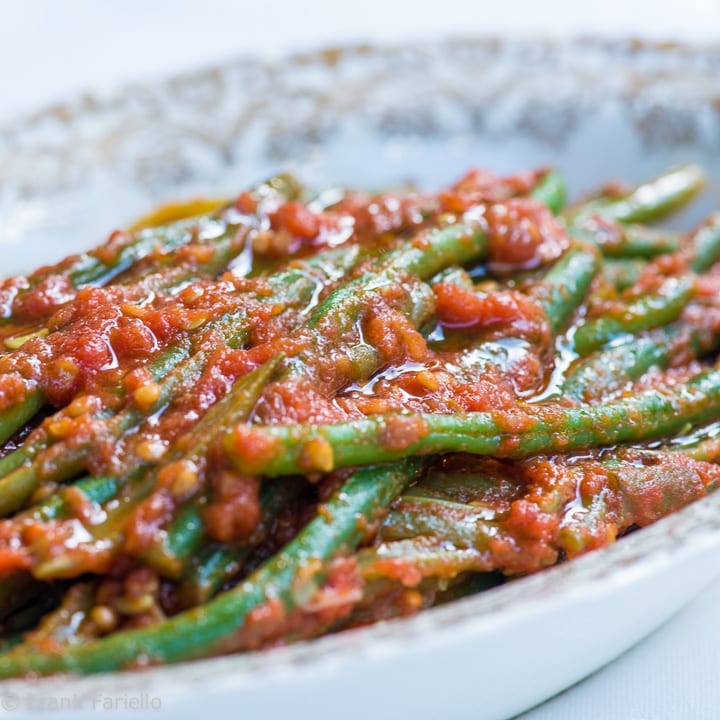 27 Comments on “Fagiolini in umido (Green Beans in Tomato Sauce)”