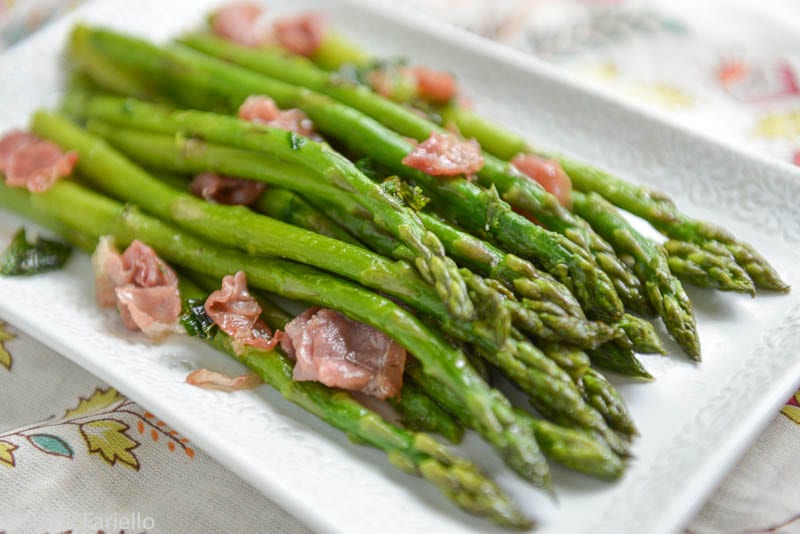 Asparagus generally doesn’t spring to mind when we think about Neapolitan cookery, but here’s an example that challenges our preconceived notions. This recipe for asparagi in casseruola comes to us from Ippolito Cavalcanti, the famed 19th century gourmand whose 1839 masterwork, La cucina teorica-pratica, is one of the Ur-texts of Neapolitan cuisine. I actually discovered the recipe via Jeanne Caròla Francesconi, who features this dish, along with quite a few others by Cavalanti, in her mid-20th century masterwork La cucina napoletana. And now I can pass it on to you, dear reader…

While Cavalcanti has some truly elaborate dishes, this recipe for asparagi in casseruola, which you can loosely translate as sautéed asparagus, is quite simple and surprisingly modern in its approach. It’s basically an example of the in padella technique applied to asparagus, with an interesting twist. As usual, the vegetable is parboiled until almost tender, then sautéed in seasoned fat. But in this case the fat is seasoned with prosciutto and mint rather than the garlic, oil and peperoncino that you’ll generally find in this kind of dish today. And for that real old-time Neapolitan taste, your fat will be lard, though oil or butter will also do just fine.

The taste is slightly unexpected but very nice indeed. A more rustic version, perhaps of involtini di asparagi e pancetta. Served with crostini of fried bread, your sautéed asparagus works nicely as antipasto or even a light main. Otherwise it makes a fine side dish.

Trim the asparagus of their tough bottom thirds and, if they’re thick, peel off their skins. (Slimmer asparagus don’t need peeling.) Parboil the asparagus in well salted water until just slightly underdone. Drain and set aside until needed.

In a skillet large enough to hold the asparagus in a single layer, sauté the prosciutto and mint in the fat of your choice over moderate heat, just until the prosciutto has turned color and the mint leaves have wilted.

Transfer the parboiled asparagus to the skillet and let them simmer in the seasoned fat for just a few minutes, long enough for them to absorb the flavors and become fully tender. Toss from time to time.

Add the remaining mint leaves and toss the asparagus once or twice more.

Cavalcanti gives you the three options for the fat indicated above: lard, butter or oil, in that order. When recipe testing for today’s post I opted for the real old-time Neapolitan option, lard, which was quite good indeed. Interestingly, Francesconi doesn’t mention the lard in her recipe, only butter or oil.

I’ve added my own personal touches to the original recipe: holding back some of the mint leaves until the end for a fresher taste and chopping the prosciutto for neater plating.(The original recipe just calls for a few slices of prosciutto.)

There are two versions of this dish: one—the one presented here—is grasso, or meat based. The other is magro, or meatless, made with tarantello, a kind of salami made from tuna. Francesconi says tarantello had disappeared by her day, and recommends using bottarga in its place. But tarantello seems to be making something of a comeback, at least in Italy. If you live in the EU, you can buy it online.

Ippolito Cavalcanti and his Cucina teorico-pratica

Ippolito Cavalcanti (1787-1859), Duke of Buonvicino, was a Neapolitan nobleman and gastronome. His family was ancient, originally from Florence, where one of his forebears was a good friend of Dante. The family migrated south and settled in Calabria, then under the tutelage of the Kingdom of the Two Sicilies,whose capital was Naples.

Cavalcanti’s masterwork, Cucina teorico-pratica, was first published in 1837. The much expanded version we know today, adding numerous Neapolitan dishes, dates from 1839. Perhaps the first example of an Italian cookbook with an explicitly regional focus, the book, right on its cover, says it aims to present “una cucina casareccia in dialetto napoletano“—home cooking in Neapolitan dialect.

Many of the dishes, presented in the Cucina teorico-praticaperhaps for the first time in print, are still fixtures of Neapolitan cooking today: parmigiana di melanzane or Eggplant Parmesan, panzerotti or Fried Pizza, vermicelli alle vongole or Spaghetti with Clam Sauce, pasta e fagioli or Pasta Fazool, sartù di riso or Rice Timbale, minestra maritata or (the misnamed) “Wedding Soup”, pasta cacio e uova or Pasta with Egg and Cheese, just to name a few. Indeed, if you read Francesconi’s contemporary classic La cucina napoletana, you’ll see she draws heavily on Cavalcanti including, of course, for this dish.

The kind of home that Cavalcanti has in mind, if his suggestions on how to furnish and equip a kitchen is any guide, is a bit grander than most. It’s a home where the standard recipe is for 12 servings. And where the “basic” recipes at the beginning of the book tell you how to bone and stuff and chicken or veal’s head and how to make a cold galantine. His recipe for homemade broth, on the other hand, is remarkably modern, even if his flavorings are slightly different from those you’d typically see in a modern Italian meat broth, calling for turnips instead of carrots, for example, and a stick of cinnamon along with the usual clove. And actually, his book is an interesting mix of “high” and “low” cooking, with the former recipes written in standard Italian, and the latter in Neapolitan dialect.

The original recipe for asparagi in casseruola

You can find an (unfortunately incomplete) online version of Cavalcanti’s masterwork online here. A fantastic resource is you read Italian! There you’ll find the original version of today’s asparagus recipe:

Like so many old time recipes, measurements are basically absent and the directions pretty loose, too. Cavalcanti assumes a sense of proportion as well as basic understanding of culinary techniques.

Regular readers may have noticed it was a “quiet” May here at Memorie di Angelina. For the first time in my nearly ten years of blogging, I went a whole month without a single post. Some readers have reached out to ask about the radio silence, but the reason is actually very simple and rather boring: work! It’s been a hellishly busy period at the office, and I’ve been left with little time and even less energy to dedicate to anything else. And so  I’m posting this recipe, intended for the beginning of asparagus season, at the very end. But I’m still here, and hopefully now that the rush seems to be over (fingers crossed) I can revert to my usual blogging schedule. Thanks for your patience. It’s good to be back… 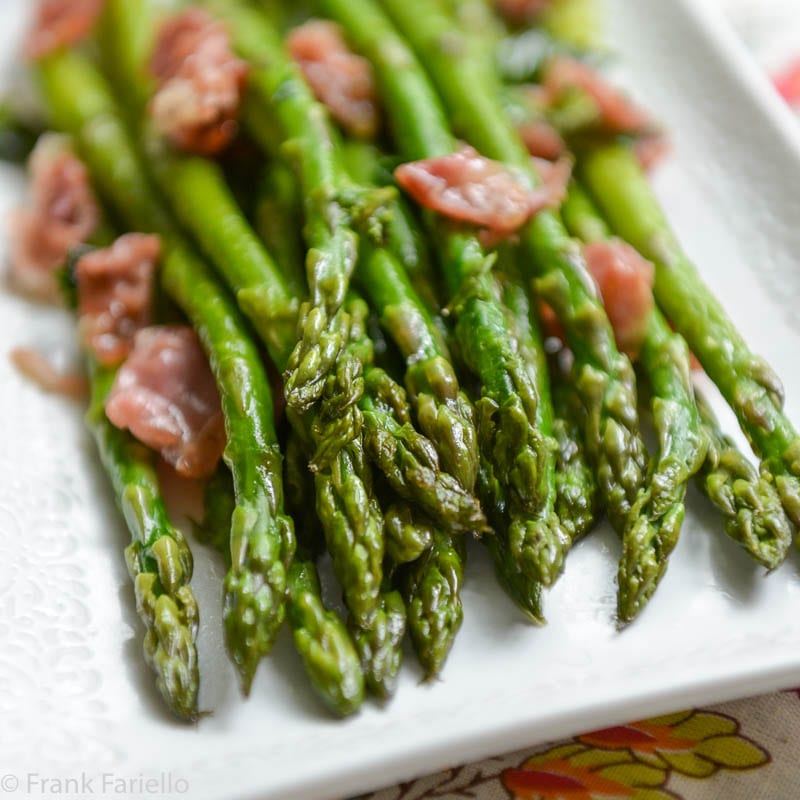